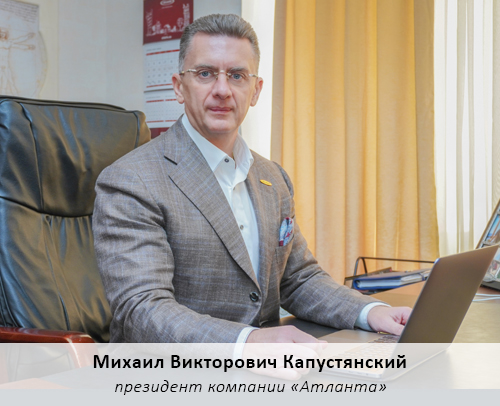 «Many years ago, when the idea came to me to organize a real estate agency, which was not yet in Odessa, highly professional and responsible in its essence, I thought for a long time what to call it.I constantly went over in my head a lot of options, but none suited me. The name had to reflect something fundamental and strong, but I wanted the name to also have some kind of femininity: it's no secret that more women than men work in real estate agencies. And besides this, it should be close to Odessa and Odessans. This is the difficult task I set for myself. And at some point, I accidentally saw on the tourist avenue one of the most famous sculptures of Odessa - the Atlanteans from Gogol Street. I immediately felt that &quot;atlas&quot; is what I need. Firstly, strength and stability. Secondly, the connection with the Atlanteans from the legendary Atlantis - a beautiful country that outstripped in its development the states and peoples surrounding it. Thirdly, symbolism for Odessa. But somehow it didn’t work out with femininity. But &quot;Odessa&quot;, &quot;South Palmira&quot; are also feminine.

«Stop, if the Earth rests on Atlantean men, then at least Odessa rests on women,” I thought. This is how a new Odessa real estate agency with the female name Atlanta was born, combining male strength and resilience, with female care and devotion to duty.»

looking for clients per month

To enable everyone to live, do business and improve the quality of life in the best possible place.

«Atlanta»- a dynamically developing company with an impressive intellectual potential, an extensive client base, modern technologies in management, with clear plans and development prospects. The company's business processes meet the standards of professional and quality service of the European level.

We strive to satisfy the needs of our customers to the maximum, not only by increasing the efficiency of our existing business areas, but also by developing new ones that meet the ever-expanding range of business activity of the service market as a whole.

We deliver what we promise and we are honest with our clients, as their trust is our most valuable achievement.

We offer the most modern technologies and provide services that meet international standards.

We work in such a way that the return from our activities is maximum.

We work openly and honestly, providing our clients with complete and reliable information.

We are a team of like-minded people who work for our clients, adhering to a high level of business ethics and effective interaction.

We are competent specialists responsible for our clients, partners and our colleagues.

HOW WE SOLVE CLIENT PROBLEMS The location of the office is convenient for customers and employees of the company. A good transport interchange allows you to quickly get from the office to anywhere in the city.

The company guarantees high quality of services at all stages of interaction with the client, controls the transaction process.

The company guarantees the professionalism of its employees: all newcomers are trained and supervised by experienced mentors.

Do you have any properties questions?

Districts of the city